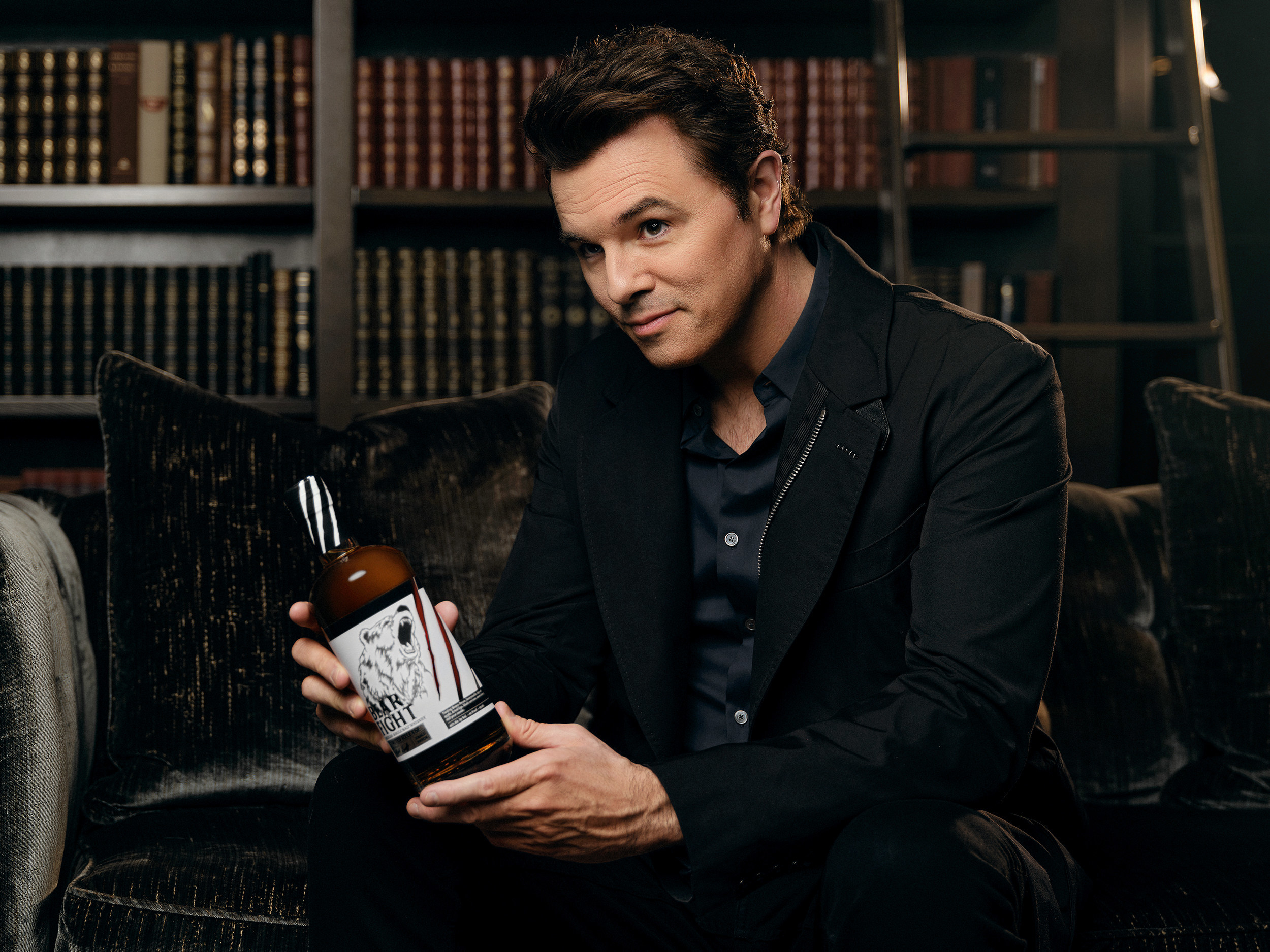 As Bear Fightexpands its launch, MacFarlane steps in as a Brand Stakeholder & ChiefStoryteller

Raleigh, N.C.(October 19, 2022) | Today Bear Fight American Single Malt Whiskey announces SethMacFarlane as a brand stakeholder. In addition to his equity stake in thebrand, the writer, actor, director, producer, and singer will also serve asBear Fight’s Chief Storyteller – establishing the brand’s unique voice andemulating Bear Fight’s disruptive, yet approachable spirit through creativepieces as the brand expands its launch after its initial release in May2022.

“There’s a lot of whiskey out there. So for me to putmy name on it, you know it's either great, or I’m getting paid a ton of money,”said Seth MacFarlane. “Well, they’re paying me almost nothing which means BearFight is damn good whiskey. I don’t always stare off to the left side of aphoto at something off-camera while holding a bottle, but when I do, thatbottle is Bear Fight whiskey.”

“Our partnership with Seth MacFarlane is invaluable tous as his personality and work push the envelope just like Bear Fight,” saidAnthony Moniello, Co-CEO of Next Century Spirits (NCS). “Bear Fight was createdto challenge the traditional norms of single malt whiskey and rewrite the rulesof the American whiskey experience. We believe Bear Fight’s versatility andapproachable price point will set the brand up to be the #1 American SingleMalt Whiskey that propels the category forward.”

Aged for at least three years in first-fill bourbonbarrels and finished in peated-smoked oak and sherry casks, Bear Fight is aversatile American Single Malt Whiskey that mixes the new-world flavors ofAmerican Whiskey and Bourbon, with old-world flavor notes and traditions ofsingle-malt whiskey. The result is an aroma and flavor of candied pecans, ripered apples, sweet sherry, and a hint of Islay-style peat smoke.

Bear Fight is about unabashed authenticity. It’s aboutquality, innovation, perseverance, and confidence. We’re comfortable with whowe are, and our approach to whiskey reflects this. We’re not a boring,run-of-the-mill whiskey and we’re not afraid to prove it to you.

Next Century Spirits is a full-service distilledspirits and marketing company. NCS specializes in the creation and process ofdistilled spirits for private label, bulk, and private brands. They have wonnumerous awards including the 2021 North Carolina Distillery of the Year. Theyproduce one of the top 20 whiskies in the world and ship to customers all overthe globe.

To learn more about their services, please visit: https://nextcenturyspirits.com or check them out on Instagram or Facebook.

Seth MacFarlane’s talents encompassevery aspect of the entertainment industry. At 24, he became theyoungest showrunner in television history when his animated series “FamilyGuy” aired on FOX. Heading into its 21st season, the show has garneredMacFarlane five Emmys and makes him the tied record-holder for the mostvoice-over Emmy wins of all time. Most recently, MacFarlane premiered“The Orville: New Horizons” on Hulu, the third season of his Emmy-nominated,live-action, space adventure series in which he created, executiveproduces, and stars in. MacFarlane made his film directorial debut with thethen-highest-grossing original R-rated comedy of all time, TED. Inaddition to voicing the lovable, foul-mouthed teddy bear, he alsoco-wrote the film, which went on to make more than $545 million worldwide. Onthe heels of that success, MacFarlane hosted the 85th Academy Awards,where he was nominated for “Best Original Song” from TED, and then wroteand directed the prosperous sequel, TED 2. Due to its cult following,MacFarlane is currently in production on the anticipated “Ted” TV series forPeacock, in which he will reprise the voice of the iconic teddy bear,while also directing, writing, and executive producing all episodes. Amulti-hyphenate at his core, MacFarlane is also a five-time Grammy nominatedvocalist who has released seven studio albums, his most recent being Blue Skies, and has landed several No. 1 debuts onthe iTunes Jazz Charts.

Today is Repeal Day! Let's Celebrate with a Cocktail
A Toast to the Drink Makers - National Bartender Day is Tomorrow!
BODY Vodka partners with Next Century Spirits to expand distribution
Next Century Spirits, A Leading Innovative Spirits Company, Announces M&A Acquisition of Emerging Better-For-You RTD Portfolio Company, XED Beverages
Bear Fight American Single Malt Whiskey Announces Partnership with Seth MacFarlane
Fox Entertainment Partners with Next Century Spirits
Next Century Spirits Debuts Caddy Clubhouse Cocktails: A Brand New Ready-to-Drink (RTD) Cocktail in Partnership with Golf Legend Greg Norman
Award-Winning Bear Fight Whiskey Available in North Carolina ABC Liquor Stores
Award-winning spirits company establishes new facility in Zebulon, NC
Next Century Spirits Awarded 2 Double Golds, 7 Golds and North Carolina Distillery of the Year Award at New York International Spirits Competition
Next Century Spirits, A Leading Full-Service Distilled Spirits Company, Announces Leadership Changes
Innovations in Distilling
SUSTAINABILITY + SPIRITS
The Magic of Cask Finishing in Spirits
Distillery Nation Features CEO, Scott Bolin
Direct-to-Consumer Marketing for Spirits Brands is Possible with Retail Partnerships
Flavored Whiskey Grows Up with These Four Unique Flavors
What The Rise in To-Go Alcohol Means for the Spirits Industry
7 Ways to Enjoy Your Favorite Whiskey
How To Expand Your Business Into Canned Cocktails
The Appeal of Celebrity Alcohol Brands Goes Beyond the Well-Known Names
Do Spirits Go Bad? And Other Alcohol-Related Questions We Know You’re Asking
You’re Familiar With Craft Beers, But What Are Craft Spirits?
Hello, My Name Is: Rob Mason, Chief Operating Officer. Let’s Talk Supply Chain Issues
How Current Trends in the Craft Spirits Industry Benefit Small Businesses
Five Easy Ways to Transition Your Bar Menu to Specialty Holiday Cocktails (and Attract More Patrons)
How Focusing on Lifestyle and Trends Can Boost Your On-Premise Alcohol Sales
What’s Prompting an Impressive Growth in the Craft Spirits Industry?
Meet Tyler Nash – Production Technician
Customizing Bulk Spirits To Craft Unique and Game-Changing Brands
Why gin is making a comeback, and how you can stand out with your own private label
Do I Need a Liquor License? An Alcohol Distributor? Your Get-Started Guide
Meet Leslie Johnson – Beverage Laboratory Manager
The Best Way to Pair Your Favorite Spirit with Chocolate
These Cocktail Dupes Will Have You Designating Any Month as Dry January
Compete with Premium Spirits with Your Own Private Label
Meet Scott Hollowell – Process Engineer
An Earth Day Toast to Sustainable Spirits
WAYS TO EMBRACE LOWER CALORIE ALCOHOLIC DRINK TRENDS AND INCREASE SALES
HOW TO NAVIGATE INFLATION IN THE ALCOHOL INDUSTRY IN 2022
WHY BAR AND RESTAURANT OWNERS ARE SAYING CHEERS TO HAPPY HOUR
THE ART OF BLENDING AND ROLE OF A MASTER BLENDER
COCKTAILS THAT ARE EASY ON THE STOMACH
GRAB A GLASS—IT’S NATIONAL BOURBON DAY!
RUM GUIDE: THE DIFFERENCES BETWEEN WHITE RUM, DARK RUM, AND SPICED RUM
HOW TO CREATIVELY MIX RED, WHITE, AND BLUE COCKTAILS FOR YOUR JULY 4TH CELEBRATIONS
WHAT ARE BEVERAGE COMPANIES DOING TO MAKE IT A SUCCESSFUL PLASTIC-FREE JULY?

Thank you! Your submission has been received!
Oops! Something went wrong while submitting the form.
© Next Century Spirits 2022. ALL RIGHTS.
Privacy PolicyTerms of UseAccessibility