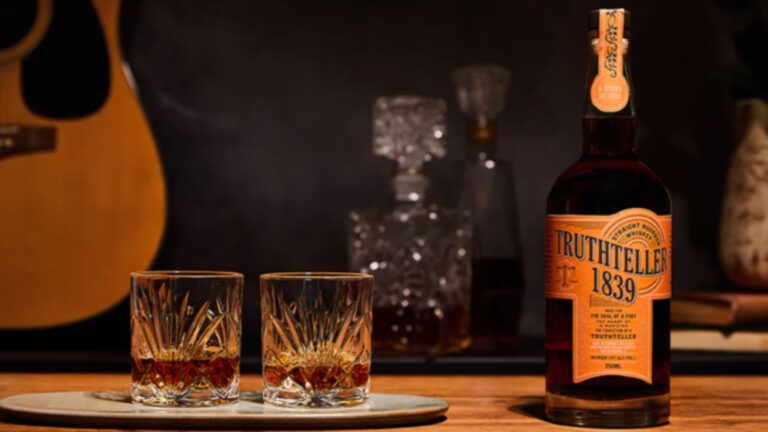 FOX ENTERTAINMENT PARTNERS WITH RESERVEBAR AND NEXT CENTURY SPIRITS

Wholly owned by FOX Entertainment, MONARCH is a Texas-sized, multi-generational musical drama about the Romans, a powerful family that rules the country music industry. The Romans are headed by the insanely talented but tough-as-nails Queen of Country Music Dottie Cantrell Roman (Sarandon). Along with her beloved husband, Albie (Adkins), Dottie has created a country music dynasty. But even though the Roman name is synonymous with authenticity, the very foundation of their success is a lie. And when their reign as country royalty is put in jeopardy, heir to the crown Nicolette "Nicky" Roman (Friel) will stop at nothing to protect her family's legacy, while ensuring her own quest for stardom.

Produced by Next Century Spirits, TruthTeller 1839 (Gold Medal Whiskey Winner at the 13th Annual New York International Spirits Competition and Silver in Tales of Cocktails 16th Annual Spirited Awards) is based on Adkins’ character, Albie, who is affectionately known in the series as the “Texas Truthteller” and King of Country music, and be featured in MONARCH as a key storyline moment in an episode scheduled to air in November.

The double-barreled straight bourbon whiskey will be available for purchase exclusively through ReserveBar when the series premieres Sunday, Sept. 11, immediately following the FOX NFL doubleheader (8:00-9:00 PM ET, and simultaneously to all time zones).

Adds Laura Caraccioli, Senior Vice President, Head of Strategic Creative Partnerships, “We wanted to take an entirely new approach to consumer product development with FOX’s first wholly-owned scripted series, MONARCH, by creating a standalone business that supports this exciting new IP.  We worked alongside the show’s development team and crafted a new bourbon brand with a truly buzzworthy name that reflects the show. Collaborating with Next Century and ReserveBar, we brought the brand of Truthteller 1839 to life by curating tasting notes that reflect the inner soul of MONARCH and deliver its spirit directly into the hands of fans.”

“As a pioneer in the spirits ecommerce segment, ReserveBar has always prided itself in being at the “tip of the spear” in terms of innovations and brand partnerships. TruthTeller 1839 Bourbon is the logical extension of our leadership in celebrity and entertainment themed spirits, and we expect this to be just one of numerous projects that we will be conceptualizing and launching in partnership with FOX and others. We strive to make ReserveBar an exciting discovery platform with curated spirits, and this exclusive collaboration delivers on exactly that,” said Lindsay Held, co-founder and CEO of ReserveBar. “By partnering with FOX Entertainment and Next Century to bring TruthTeller 1839 Bourbon from the television screen to avid bourbon enthusiasts, we saw an opportunity to create something unique and special, available only to ReserveBar consumers.”

“NCS is extremely excited to partner with FOX and ReserveBar on this unique opportunity. With such a robust story line, we were able to take inspiration from the show to create a truly custom bourbon,” said Jenny Gates, Executive Vice President of Finance and Strategy at Next Century Spirits. “We focused on producing a smooth, sweet, oak forward whiskey with added notes of smoke, leather, biscuits, and caramel that reflects the Texas heritage from both the bourbon and the show.”

Founded in 2013, ReserveBar is the established e-commerce leader in rare, luxury, and ultra-premium spirits, specializing in customization, personalization, and innovative gifting. In addition to its content-rich, on-brand experience, ReserveBar specializes in new and limited edition products, celebrity brands and is the go-to platform for new product launches. ReserveBar is a destination for today's modern, convenience-driven adult shopper, delivering the most curated offerings to enthusiasts across the United States. ReserveBar is a technology platform at its core, utilizing cutting-edge software, analytics, and an exceptional retail network to deploy solutions that simplify the compliant purchase of beverage alcohol on ReserveBar.com, as well as numerous partner sites, including spirits brands, publishers, e-commerce partners, and gifting platforms. For more information, please visit www.reservebar.com.

About Next Century Spirits

Next Century Spirits creates unique brands that resonate with consumers' varied occasions, values, and lifestyles. Using proprietary blending and finishing techniques, NCS develops differentiated products to toast every moment (small or large) worth celebrating! Whether it's through their own brands or through collaborations with notable partners, Next Century Spirits is a leader at the forefront of spirits innovation.

For Next Century Spirits:

Today is Repeal Day! Let's Celebrate with a Cocktail
A Toast to the Drink Makers - National Bartender Day is Tomorrow!
BODY Vodka partners with Next Century Spirits to expand distribution
Next Century Spirits, A Leading Innovative Spirits Company, Announces M&A Acquisition of Emerging Better-For-You RTD Portfolio Company, XED Beverages
Bear Fight American Single Malt Whiskey Announces Partnership with Seth MacFarlane
Fox Entertainment Partners with Next Century Spirits
Next Century Spirits Debuts Caddy Clubhouse Cocktails: A Brand New Ready-to-Drink (RTD) Cocktail in Partnership with Golf Legend Greg Norman
Award-Winning Bear Fight Whiskey Available in North Carolina ABC Liquor Stores
Award-winning spirits company establishes new facility in Zebulon, NC
Next Century Spirits Awarded 2 Double Golds, 7 Golds and North Carolina Distillery of the Year Award at New York International Spirits Competition
Next Century Spirits, A Leading Full-Service Distilled Spirits Company, Announces Leadership Changes
Innovations in Distilling
SUSTAINABILITY + SPIRITS
The Magic of Cask Finishing in Spirits
Distillery Nation Features CEO, Scott Bolin
Direct-to-Consumer Marketing for Spirits Brands is Possible with Retail Partnerships
Flavored Whiskey Grows Up with These Four Unique Flavors
What The Rise in To-Go Alcohol Means for the Spirits Industry
7 Ways to Enjoy Your Favorite Whiskey
How To Expand Your Business Into Canned Cocktails
The Appeal of Celebrity Alcohol Brands Goes Beyond the Well-Known Names
Do Spirits Go Bad? And Other Alcohol-Related Questions We Know You’re Asking
You’re Familiar With Craft Beers, But What Are Craft Spirits?
Hello, My Name Is: Rob Mason, Chief Operating Officer. Let’s Talk Supply Chain Issues
How Current Trends in the Craft Spirits Industry Benefit Small Businesses
Five Easy Ways to Transition Your Bar Menu to Specialty Holiday Cocktails (and Attract More Patrons)
How Focusing on Lifestyle and Trends Can Boost Your On-Premise Alcohol Sales
What’s Prompting an Impressive Growth in the Craft Spirits Industry?
Meet Tyler Nash – Production Technician
Customizing Bulk Spirits To Craft Unique and Game-Changing Brands
Why gin is making a comeback, and how you can stand out with your own private label
Do I Need a Liquor License? An Alcohol Distributor? Your Get-Started Guide
Meet Leslie Johnson – Beverage Laboratory Manager
The Best Way to Pair Your Favorite Spirit with Chocolate
These Cocktail Dupes Will Have You Designating Any Month as Dry January
Compete with Premium Spirits with Your Own Private Label
Meet Scott Hollowell – Process Engineer
An Earth Day Toast to Sustainable Spirits
WAYS TO EMBRACE LOWER CALORIE ALCOHOLIC DRINK TRENDS AND INCREASE SALES
HOW TO NAVIGATE INFLATION IN THE ALCOHOL INDUSTRY IN 2022
WHY BAR AND RESTAURANT OWNERS ARE SAYING CHEERS TO HAPPY HOUR
THE ART OF BLENDING AND ROLE OF A MASTER BLENDER
COCKTAILS THAT ARE EASY ON THE STOMACH
GRAB A GLASS—IT’S NATIONAL BOURBON DAY!
RUM GUIDE: THE DIFFERENCES BETWEEN WHITE RUM, DARK RUM, AND SPICED RUM
HOW TO CREATIVELY MIX RED, WHITE, AND BLUE COCKTAILS FOR YOUR JULY 4TH CELEBRATIONS
WHAT ARE BEVERAGE COMPANIES DOING TO MAKE IT A SUCCESSFUL PLASTIC-FREE JULY?

Thank you! Your submission has been received!
Oops! Something went wrong while submitting the form.
© Next Century Spirits 2022. ALL RIGHTS.
Privacy PolicyTerms of UseAccessibility